Discovering the Humanities Through Competitions

Scholarly societies across the humanities have exhibited imagination in creating academic competitions for middle and high school students. For example, the Linguistics Society of America (LSA) established the North American Computational Linguistics Olympiad (NACLO) in 2007. Thousands of high school students compete in NACLO each year, solving linguistic problems and puzzles, with the top two teams going on to the International Linguistics Olympiad. Participation in the contest is the foundation for extracurricular linguistics programs across the U.S. and Canada. In 2015, LSA ramped up its involvement in NACLO “to increase interest and participation in linguistics at the pre-college level.”

The American Classical League (ACL) and National Junior Classical League (NJCL), meanwhile, sponsor state competitions for middle and high school students that culminate in an annual national convention. ACL established NJCL in 1936 to “encourage an interest in and an appreciation of the language, literature, and culture of ancient Greece and Rome.” NJCL has grown to include more than 1,000 local chapters who compete in a wide range of academic, artistic, and athletic contests. ACL and NJCL also administer the National Latin Exam to over 100,000 secondary students a year worldwide, as well as national exams in Greek, classical etymology, Roman civilization, and Latin vocabulary. Seniors who excel on the higher level national exams are eligible to apply for annual scholarships to fund their continued study of Latin or Greek as an undergraduate. 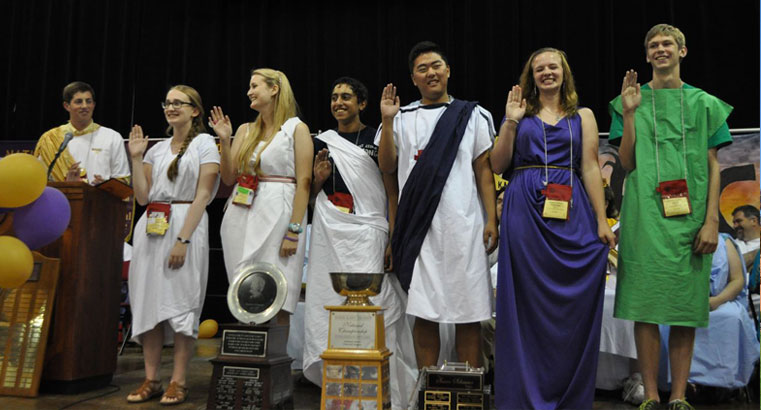 Scholarly societies are not alone in inviting high school students to engage the humanities through similar competitive events. For example, the Parr Center for Ethics at the University of North Carolina at Chapel Hill is home to the National High School Ethics Bowl, which is modeled on the Association for Practical and Professional Ethics’ Intercollegiate Ethics Bowl. Students around the country examine case studies that involve important ethical challenges, conducting research into related issues to develop well-supported answers to potential questions from judges regarding the cases. The Parr Center oversees 36 regional competitions throughout the U.S. and hosts the national competition on campus every April.

The success of these competitions demonstrate their appeal to middle and high school students looking to distinguish themselves academically through extracurricular activities. And these examples illustrate how they expose students to disciplines not commonly engaged through typical K-12 curricula. The competition model can also build enthusiasm for disciplines that pre-collegiate students are already familiar with; National History Day—an annual competition that involves over 600,000 students—is a perfect example. We’ll be sharing more strategies that scholarly societies, faculty, and administrators are using to engage K-12 students and other audiences in the months ahead.