It is March and the appropriations process on Capitol Hill is gaining steam. In early February, President Obama released his budget request, which outlined how his administration hoped to allocate $4.2 trillion in FY 2017. On March 23rd, the House Budget Committee issued its non-binding budget recommendations. Now the House and Senate Appropriations Committees are at work to allocate funds across the government, and Members of Congress are communicating their top funding priorities to those committees.

We host Humanities Advocacy Day every March to align with this process so that as Members of Congress weigh priorities, they know that federal funding for the humanities is crucial to communities around the country.

This year’s Humanities Advocacy Day, on March 15th, brought advocates from 40 states into Congressional Offices. These advocates were broadly representative of the humanities community: leaders and members of scholarly societies; deans and faculty from two- and four-year colleges and universities; representatives from humanities centers; and archivists and librarians. Together, they advocated for a range of humanities funding streams and policy issues. Below, Sylvea Hollis, a PhD Candidate in History at the University of Iowa who is currently working at the American Alliance of Museums, discusses humanities funding with James Rice in Senator Grassley's office. 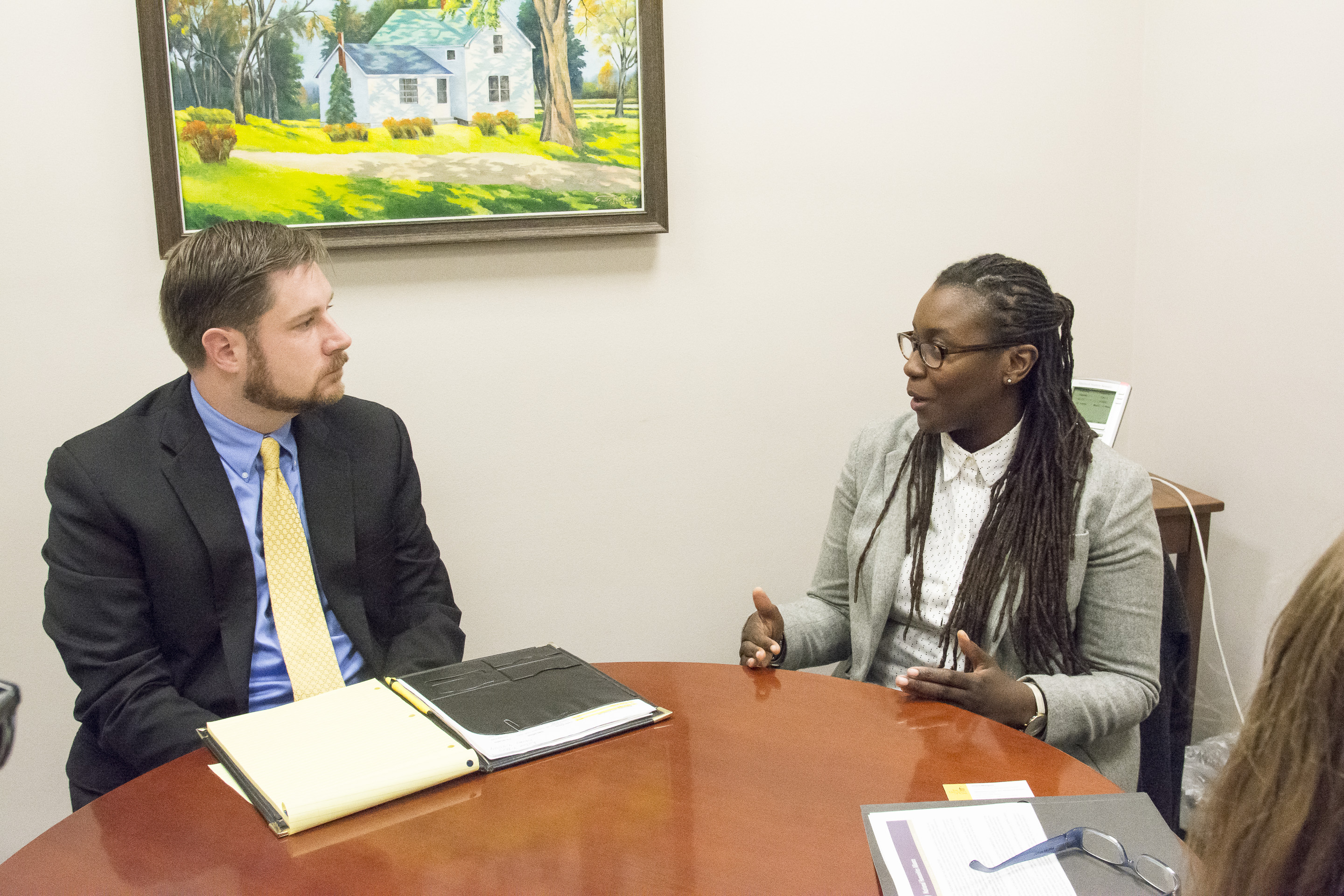 Most advocates championed the value of the National Endowment for the Humanities and urged their Members of Congress to sign letters circulating in the House and Senate requesting increased funding for NEH. In making this pitch, they described their own work and highlighted NEH grants to the Members’ districts. They worked to build understanding of the NEH’s new Common Good initiative, which harnesses the power of the humanities to address society’s most pressing challenges. Below, Dan Kubis of the University of Pittsburgh discusses the university's "Year of the Humanities" with a staffer from Senator Bob Casey's office. 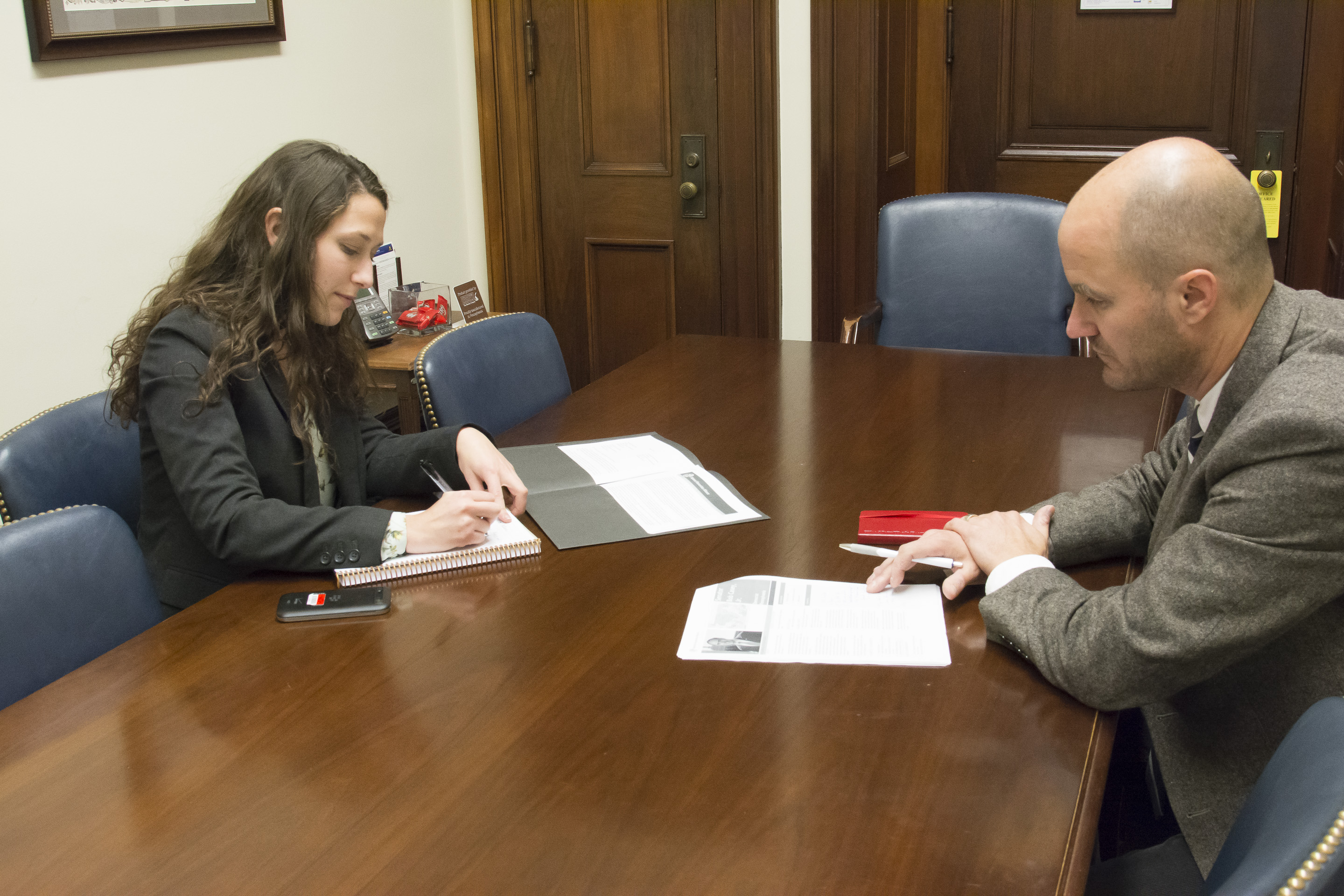 Advocates also noted that NEH’s funding has been severely eroded in recent years. Despite its first increase in six years for FY 2016, it is still operating at 19% of its FY 2010 budget. While the president’s FY 2017 request would allot nearly $2 million more to NEH, bringing its funding level to $149.8 million, we are requesting $155 million in the hope of moving closer to rebuilding NEH’s capacity.

Many participants also advocated for Title VI and Fulbright-Hays. These programs faced a nearly 40% cut in FY 2011, from $125.9 million to $75.8 million, and then subsequent cuts in the following year. For the past three years, these programs have been funded at $72.2 million. Despite this recent decline, President Obama requested a 69% reduction to the Fulbright-Hays program for FY 2017. Our advocates urged Congress to reject these proposed cuts, explaining, based on first-hand experience, why programs that fund scholars, students, and teachers to develop deep cultural knowledge should receive more funding, not less. They also asked their Members of Congress to sign letters circulating in the House and Senate that asked for at least level funding (House) and a $6.5 million increase (Senate).

Still others advocated for the National Historical Publications and Records Commission (NHPRC), commonly referred to as the “grant-making arm” of the National Archives and Records Administration (NARA). They urged Congress to provide at least $5 million for the NHPRC grant program, as requested in the President’s budget. Those advocating for NHPRC discussed their first-hand experience working on projects such as the George Washington Papers at the University of Virginia and the Eleanor Roosevelt Papers at George Washington University.

Other advocates discussed a bill to protect cultural heritage in Syria, funding for the Institute of Museum and Library Services, and funding for K-12 history and civics educations. For an overview of all of NHA's policy priorities, click here.

Social media was a great tool for amplifying the message of the day. As Rachel Arteaga, of the Simpson Center for the Humanities at the University of Washington noted, "Many of my posts, which were short and simple notes of gratitude for having taken the time to meet with me on the importance of the humanities, were noticed and shared by the offices. I am encouraged that these channels will continue to be effective means of communicating updates on NEH-funded work in my state in the months between our annual visits to Capitol Hill." 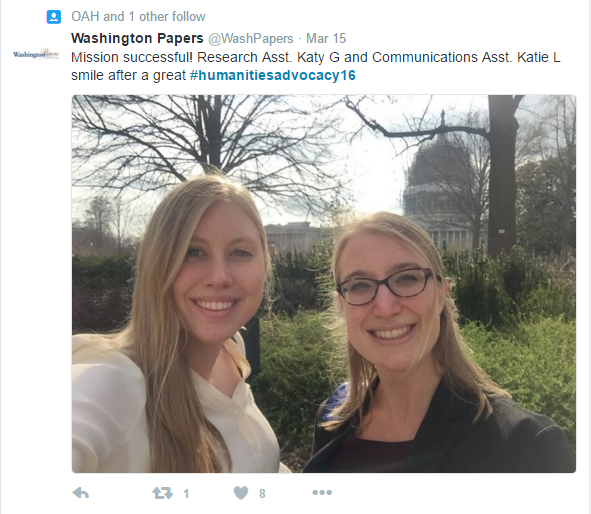 In conjunction with these Hill visits, we ran an action alert so that advocates who were unable to travel to Washington could let their Members of Congress know that they support humanities funding. And it isn’t too late! You can still take action to ask your Members of Congress to support funding for the humanities.